Beyond Bridging the Gap: the Virtual Closing Event of our project 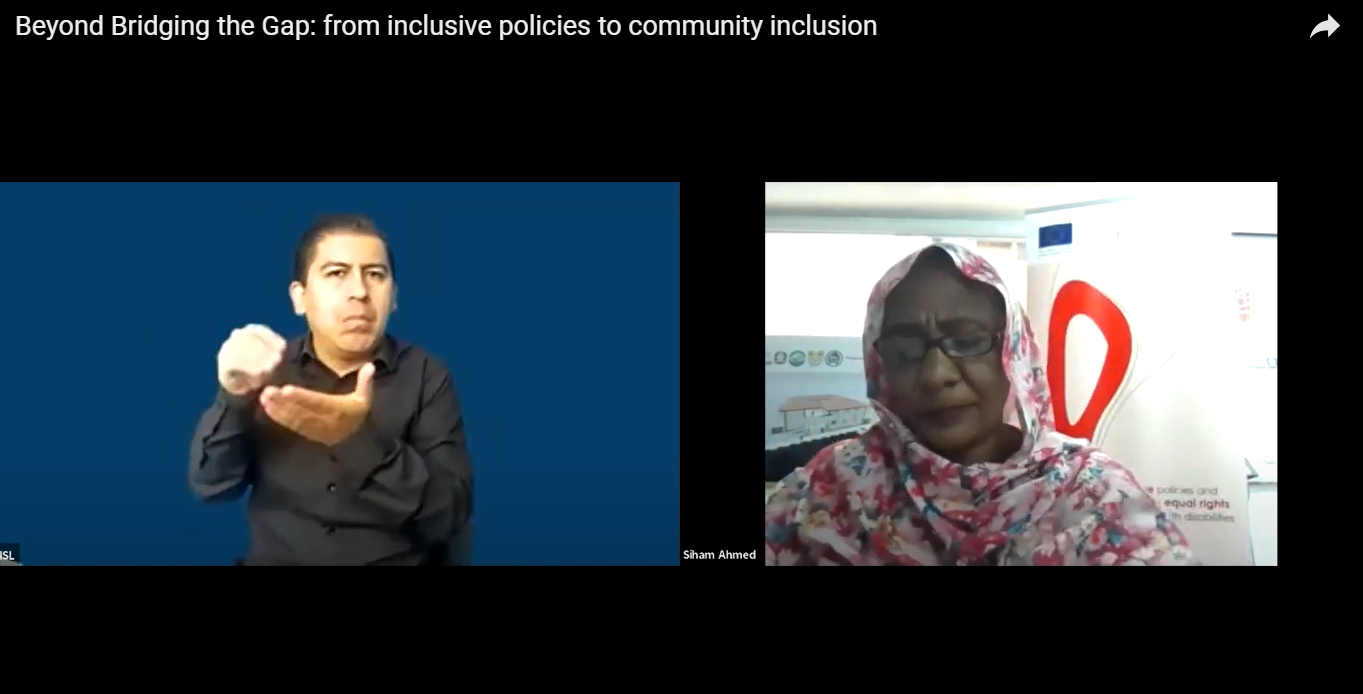 Time to wrap up. After four years of work, Bridging the Gap is about to end, and to celebrate the project organised a virtual closing event on June 14th, as part of the 14th session of the Conference of States Parties to the Convention on the Rights of Persons with Disabilities (COSP14).

The event “Beyond Bridging the Gap: from inclusive policies to community inclusion” proposed a dialogue on the contribution of Bridging the Gap and its consortium to the translation of inclusive policies to “real-life impacts” aiming at supporting the independent living of persons with disabilities in low- and middle-income countries towards the concrete implementation of disability-inclusive Sustainable Development Goals (SDGs).

Different project’s stakeholders, from the United Nations and the European Union to organizations of persons with disabilities and final beneficiaries from the five partner countries of the project (Burkina Faso, Ecuador, Ethiopia, Paraguay and Sudan), shared their views and testimonies on the impact of the inclusive policies promoted by Bridging the Gap, and on ways to capitalize upon the experience and ensure its sustainability.

The common feeling emerged during the closing event was that BtG has concretely enhanced the capacity of its partners and stakeholder to implement inclusive development cooperation achieving important results that can have an actual impact in the improvement of the day-to-day life of persons with disabilities.

As pointed out by ms. Peggy Martinello, Head of Unit Public Administration and Social Affairs at FIIAPP, BtG presented an innovative scheme of participation gathering public institutions, organisations of persons with disabilities and international cooperation actors and becoming an example of multi-stakeholder cooperation which has demonstrated to be key attaining commitment and results. “[…] In this framework it is very important for the European Union and its members do not forget about the BtG’s experience. On the contrary, what we have to do is make the most of it and give it some continuity”.

Continuity that is particularly important for the inclusion of women and girls with disabilities, as reminded by ms. Ana Peláez Nárvaez, EDF’s Vice President and member of the UN CEDAW, who called out participants not to lower the attention on the inclusion of this group.

In the past four years, the intense work carried out by the project produced many fruitful activities and as highlighted by mr. Martin Seychell, Deputy Director General at European Commission (DG INTPA), it generated tangible results for persons with disabilities in the participating countries and at global level.

Tangible results that were illustrated by the five invited project beneficiaries. In Burkina Faso, for example, ms. Maimouna Dene (UNAFEHB) asserted that “[Burkinabes with disabilities are extremely thankful to the Bridging the Gap project because it has been very fruitful in enhancing the dialogue with the national institutions. Hopefully”, she added, “we can increase the number of activities extending them also to the country’s other regions”.

In Ethiopia, BtG strengthened the capacity of FEAPD and other OPDs in addressing disability in a comprehensive manner by enhancing trainings and awareness raising programmes and events at national and regional level. Mr. Abayneh Gujo, President for the FEAPD, talked about the impetus given by the project to focus the activities on the empowerment of women and girls with disabilities, representing over 40% of the final beneficiaries.

Similarly in Sudan, women and girls with disabilities face countless challenges in accessing to education, employment, and other public services. Against this background and thanks to BtG, 150 women have benefited from different empowerment initiatives and according to ms. Siham Ahmed from the Physical Disability Challengers Organization, “now we make our voices heard in 3 States in Sudan”.

The involvement of Organisations of Persons with Disabilities (OPDs) has been the backbone of the project in all five countries, in full alignment with the CRPD principle “Nothing about us without us”. Unsurprisingly, Paraguay’s ms. Paola Duarte, President of the Paraguayan Centre for the Deaf, reminded “OPDs and persons with disabilities have fully and actively collaborated throughout the whole implementation of the project”, before reclaiming that the attention on the protection and promotion of the rights of persons with disabilities is not left behind in future cooperation policies.

Finally, mr. Xavier Mantilla from the association of Ecuadorian with intellectual disabilities AECADI summed up what eventually we all hope Bridging the Gap has been and will be: “I am firmly convinced that the experience of this project will play a fundamental role as a reference for future initiatives to be implemented in the European external action included in the new European Strategy for the rights of persons with disabilities”, words that were echoed by ms. Katarina Ivankovic-Knezevic (European Commission, DG EMPL) and mr. Facundo Chávez Penillas (UN OHCHR) in their closing remarks.

Bridging the Gap is not over yet, and few activities remain to be completed until the implementation ends on August 2nd. Still, the Virtual Closing Event at COSP14 marked the beginning of a new phase: a post-Bridging the Gap where all involved actors join forces to build upon the project’s outcomes and ensure that in the future no one is left behind.

Did you miss the event? Watch it here!