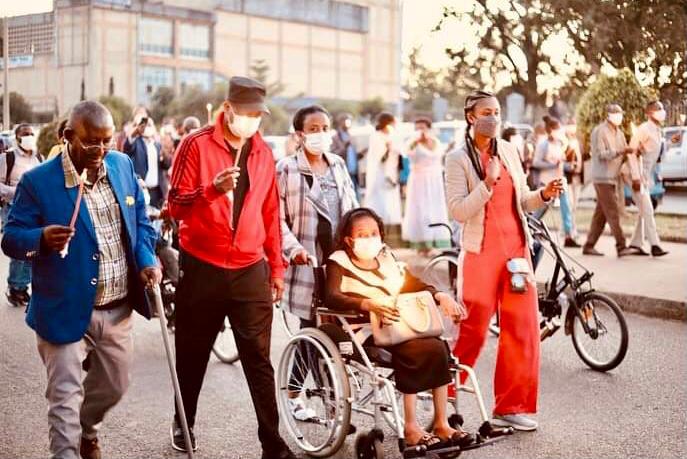 Ethiopia celebrated the International Day of Persons with Disabilities from 25 to 27 December 2020 in the city of Bahir Dar at an event organised by the Federation of Ethiopian Associations of Persons with Disabilities (FEAPD), the Ministry of Labour and Social Affairs and the Amhara Regional Bureau of Labour and Social Affairs (BOLSA).

The event could not be held on its official day, 3 December, due to the security situation in northern Ethiopia. It began on 25 December with the inauguration of a billboard near Theodros Stadium to give visibility to persons with disabilities by showcasing well-known disability activists and personalities such as Yetnebersh Nigussie along with this year celebration theme: “Building Back Better: Towards a disability-inclusive, accessible and sustainable post-COVID-19 World”. On the same day, there was a running and a wheelchair running competition involving women and men with disabilities.

On the second day, a panel discussion on the recently approved regional disability mainstreaming guideline took place. The Special Advisor to the office of the regional president Merhatsidik Mekonnen introduced the document and then there was a debate involving the Minister of Labour and Social Affairs, Ergoge Tesfaye, the Head of Labour and Social Affairs of the Amhara region, Mullunesh Abebe Amhara, and the President of FEAPD, Mihret Nigussie. This session was followed by a candlelight walk in the street to raise awareness on the rights of persons with disabilities through public participation.

It was a colourful celebration that included speeches by the Civil Societies Organizations Agency, Jimma Dilbo, the Vice-Commissioner for the Ethiopian Human Rights Commission, Meseret Mamo, and the president of FEAPD, Mihret Nigussie. At the event, Bridging the Gap received two distinctions from the Bureau of Labour and Social Affairs of the Amhara Region, one for its work in promoting the inclusion of persons with disabilities in the region and another for contributing to the organisation of this event. These awards were handed over to Shitaye Astawes, Bridging the Gap Team Leader in Ethiopia, and Waga Demssie, Bridging the Gap Capacity Building Coordinator in Ethiopia. The celebration ended with music and an inclusive dance performance by Katim Dance Team.