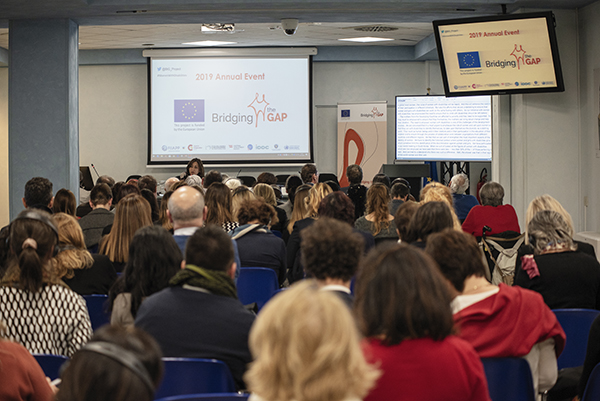 Bridging the Gap celebrated its 2019 Annual event, focused on women and girls with disabilities, on November 14th at the headquarters of the European Commission Representation in Italy, gathering institutional representatives, development practitioners and organisations of persons with disabilities.

The event was organised with the support of the Representation of the EU and the Italian Agency for Development Cooperation (AICS).It was introduced by the acting Head of the EU Representation in Italy, Vito Borrelli, who highlighted the european commitment “to promote equality between men and women in all its activities”, as well as the importance to address the specific needs of women with disabilities.

This welcome speech was followed by the opening remarks of Luca Maestripieri, Director of the Italian Agency for Development Cooperation (AICS); Germán Garcia da Rosa, Director of Public Administration and Social Affairs at the International and Ibero-American Foundation for Administration and Public Policies (FIIAPP); Renate Hahlen, Minister Counsellor and Deputy Head of Delegation, EU Delegation to the Holy See, the Order of Malta, UN Organisations in Rome and to the Republic of San Marino; Victoria Lee, Programme Manager of Bridging the Gap-component I at the Office of the United Nations High Commissioner for Human Rights (OHCHR); and Giampiero Griffo, President of the Italian Network for Disability and Development.

Tackling the inclusion of women with disabilities

The contribution made by Bridging the Gap to empower women with disabilities was also highlighted by Victoria Lee and Federico Martire, Programme Manager and Project Director of the first and second components of Bridging the Gap, respectively. As they explained in their interventions, through the promotion of affirmative actions for the inclusion of women with disabilities, the project works to ensure full compliance to the Convention on the Rights of Persons with Disabilities (CRPD) and achieve the Sustainable Development Goals (SDGs).

Two roundtables explored the topic of the inclusion of women with disabilities in low and middle-income countries talking of female leadership and exchanging experiences to remove barriers to the economic and social empowerment of women and girls with disabilities. Guided by the international normative based on the CRPD, panellists from different backgrounds such as development agencies, organisations of persons with disabilities and international organisations, shared knowledge and practices, stimulating debate with the audience and awakening their interest on the topics addressed.

The closing remarks were made by the Director of AICS Sudan, Vincenzo Racalbuto, and the Knowledge and Learning Management Coordinator of Bridging the Gap II, Alessia Rogai, who stressed that “for the defence of human rights, we cannot waste the huge strength of women with disabilities”.

The presentation of a photo project by Christian Tasso within the framework of Bridging the Gap put the finishing touch to an event attended by around 90 people, in which the empowerment of women with disabilities was revealed as a matter of human rights and equality.