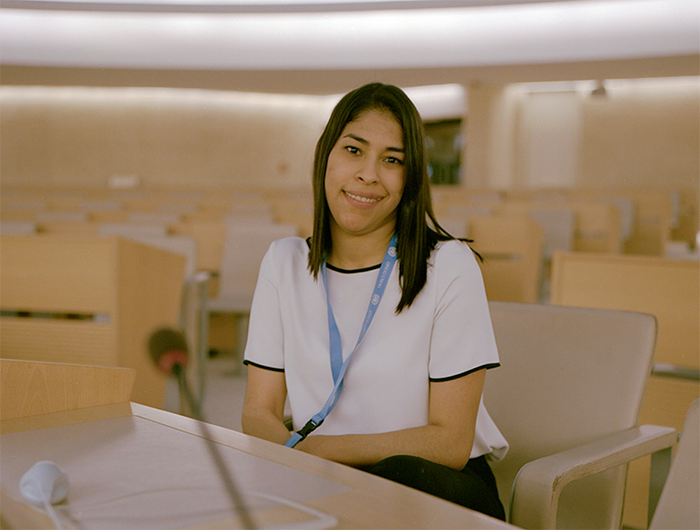 My name is Irene Valarezo, I’m from a city near Quito called Santo Domingo, I’m 27 years old, and I have cerebral palsy contracted at birth. The day I was born there was an electrical storm and a blackout happened at the hospital where my mother had gone to give birth. So, my mother had to look for another health clinic. It took seven hours until my mother finally found another hospital. Unfortunately, the doctor who delivered her was drunk and left me in my mother’s womb without oxygen, which caused my cerebral palsy.

Since I was 6 months old, I start going to Quito to rehabilitation, which is very important to improve my quality of life. I did this it in a Foundation called FUDRINE that has also supported me in my inclusion in the society. As for my education, I have gone to regular school and college. However, the school years were quite complex. I had to change schools several times because the teachers were not prepared to attend my needs and they left me alone while they attended to the rest of the group. So, my parents decided to hire a nanny to help me in a very discreet way since, in theory, this person was the teacher’s assistant for the whole class, but in practice, she was dedicated to supporting me all the time. I did not realize about this until I was 18 years old and, thinking about it, I am conscious of the fact that those who have no economic resources could never do it.

But despite the luck I had with my family and all they did to facilitate my inclusion, I also suffered discrimination. Unfortunately, parents do not explain to the children what diversity is and that we are all different. So, when children see someone different from what they consider being normal, and also when teachers make the differences get bigger because they are not prepared, discrimination often arises. Moreover, I was always good at school and I got very good marks. So, I excelled at that too and that created misgivings among the other students because the teachers made me an example of a good student. All this meant that I never felt treated like others and that those years were quite difficult because I hardly had any friends.

Then, University was a pretty drastic change because as I am from a small town, I had to move to a big city, Quito, to study at the University. I had to become independent and learn to cope with a new environment on my own. It was difficult because it was not yet adapted to the needs of persons with disabilities, so I had to adapt to it. I decided to study international relations and political science because I wanted to study something that would lead me to work for the United Nations, which had always been my dream.

After graduation, it was very difficult to find work. It is really hard to find it without a disability, and if you have a disability it becomes even harder, still having all the laws in favour. And it’s also difficult to find work when the level of education is high because they don’t know where to put you. And it’s sad that they define you only by that characteristic of having a disability, which is just another aspect of me, but it’s not what defines me.

Currently, I work in the program “Misión Las Manuelas“, an under-secretariat of the Government of Ecuador dedicated to working with persons with disabilities in a situation of poverty. It is a rather complex job because the same protocol is not applicable to all people, even if they have the same disability, but I like this work very much because I feel useful and I think I can contribute a lot to the improvement of public policies. Furthermore, I was invited by the Permanent Mission of Ecuador to the United Nations office in Geneva to participate in the latest review committee of the UN Convention on the Rights of Persons with Disabilities (CRPD), something I have always dreamed of and for which I feel very grateful.

Another wish that I have is that the disability movement joins in a bigger, single and defined movement in spite of the differences, because we are the same in that, in the difficulties we face due to our disability, whatever it may be. Together we must make the motto of the United Nations Convention on the Rights of Persons with Disabilities a reality: “Nothing about us, without us“, because the stories of persons with disabilities have always been on the mouth of others, of doctors, of parents, of physiotherapists, and not by persons with disabilities themselves. We have to speak for ourselves because if we let others speak for us, they might only look at health issues, for example, and for them, it might be more important to do rehabilitation. That is fine, but it is only one aspect. I also want to have a fulfilling life like any young woman, I want to enjoy my free time, go to concerts, go out with my friends, etc.

There is still a lot of work to be done and it is important to promote inclusion because it is the first step in living together. Inclusion is not just about putting yourself in a public space and give visibility to the existence of that diversity; I need to be part of something, to be useful, to give and receive by learning and teaching others. Persons with disabilities must be taken into account and not just present in a space. We have to be an active part of society, living all in community.

Irene Valarezo Córdova, Assistant to the Undersecretary of Las Manuelas Mission for the Government of Ecuador’s Plan Toda Una Vida