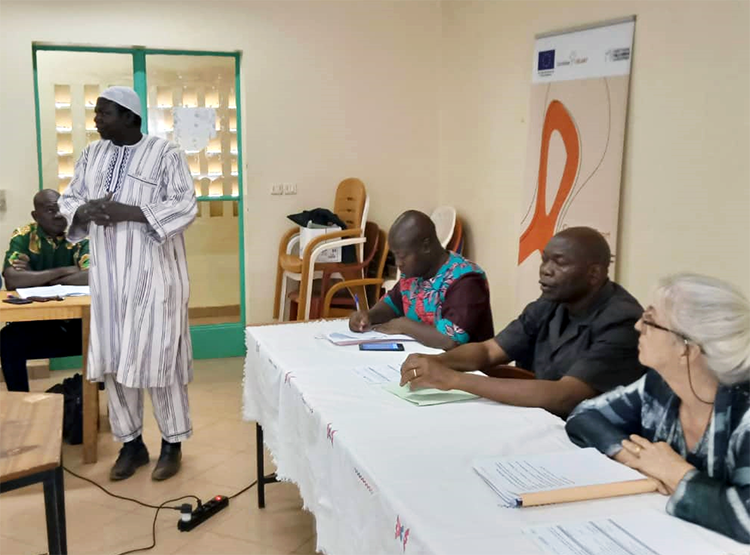 On 27th February 2020, Burkina Faso‘s draft of the National Strategy for the Protection and Promotion of the Rights of Persons with Disabilities was technically validated at an event held in Ouagadougou at the Women’s House of the Ministry of Women, National Solidarity, Family and Humanitarian Action (MFSNFAH). The exercise is supported by Bridging the Gap project, implemented in Burkina Faso by the Italian Agency of Development Cooperation.

The technical validation exercise was led by M Yameogo K. Gerome, Head of Mission of the MFSNFAH and M. Harouna Kafando, Permanent Secretary of the National Intersectoral Council for the Protection and Promotion of Persons with Disability (SP/COMUD/Handicap), and it was attended by experts from 14 ministries, representatives of organisations of persons with disabilities, international NGOs and the Bridging the Gap coordinator in the country, Dolores Mattossovich.

The workshop aimed to present the document, drafted by TAO Consulting, to the experts and a larger representation of OPDs and NGOs, as well as to collect their observations and comments and validate it. The document had already been endorsed by the Technical Committee appointed by MFSNFAH, a committee which included the representatives of the main OPDs networks.

At the workshop, the consultants illustrated the Strategy, which is structured in five main axes of intervention and takes into account the implementing bodies and financing aspects that remain critical. The National Plan of Development (PNDES), and the Sustainable Development Goals (SDGs) are a guiding reference.

After a general debate on procedural issues, the Strategy will have to be endorsed with the Plan of Operation by the National Consensus Workshop and then by the National Commission of Planning and Development (NCPD). Each chapter of the document was reviewed to identify points for improvement, both in terms of structure (the content of the axes) and in general terms such as the updating of data, the use of appropriate terminology, the need of indicators, or Issues of transparency and accountability, among others.

With regards to the strategic axes, the following were the object of debate: access to health, the promotion of sign language, access to justice and the participation of persons with disabilities in political life. Bridging the Gap II country coordinator pointed out the opportunity to detail the links between the SDGs and the strategic axes/outcomes/activities of the strategy, to clearly express the conceptual model of disability adopted; and the importance of focusing on prevention, especially in terms of health defined as well-being and the need of an inclusive approach by all sectors.

As mentioned, this strategy and its related activities are part of the Bridging the Gap action plan in Burkina Faso and, is the basis for the development of the National Action Plan that will be approved in a second stage through a National Consensus Workshop.

The update of the Strategy is a clear expression of the Government’s commitment to promote the inclusion of the rights of persons with disabilities. Indeed, Burkina Faso, which was one of the first countries to sign the Convention on the Rights of Persons with Disabilities in 2009, adopted several measures over the years, including a National Strategy, which, due to several constraints, was not implemented.

Since 2018, the country has presented its first report on the situation of persons with disabilities to the United Nations, which was followed in 2019 by the OPDs’ alternative report. In 2018, the President of Burkina Faso instituted a forum with persons with disabilities and a major effort is being made to address the issue of poverty through inclusion in the labour market.

For this purpose, a study supported by the delegation of the European Union was recently completed to provide indications on the inclusion of persons with disabilities in the labour market. The national census carried out at the end of 2019, despite the situation of insecurity in the northern part of the country, has included for the first time the Washington Group’ s questions. In the upcoming months, this will provide further information on the situation of persons with disabilities. It is in this context that the five-year draft update of the National Strategy was carried out.