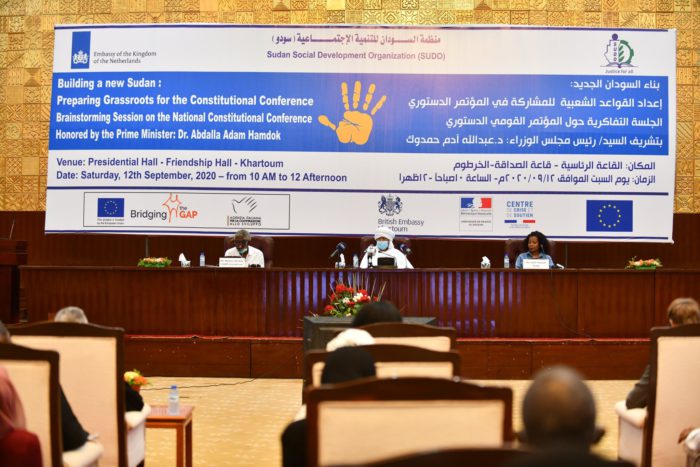 The Prime Minister of Sudan, Dr Abdalla Hamdock, participated in a brainstorming session on the National Constitutional Conference held by the Sudanese NGO Sudan Social Development Organization (SUDO) on 12 September with the support of Bridging the Gap. This event, hosted in the Presidential Friendship Hall in Khartoum, is the first national gathering on the preparation for the Constitutional Conference scheduled to be convened by the Government at the end of the transition period.

This SUDO initiative, funded by Italian Agency for Development Cooperation (AICS), the European Union, France, Netherlands, and the United Kingdom, aims to raise citizens’ awareness of their civil rights and foster the democratic participation of the multiple groups composing the Sudanese society.

Bridging the Gap in Sudan supports it through SUDO by helping to promote participation in the democratic process of organisations and persons with disabilities in the Red Sea State. In this context, SUDO carries out activities that comprise awareness-raising sessions on civil rights, rules of democratic participation, representability and sensitization on the election process for grassroots organizations, so as to ensure equitable and inclusive participation in the first democratic elections in decades.

In his intervention, the Prime Minister welcomed this initiative and encouraged SUDO and the representatives of civil society organisations to actively participate in this process, bringing in the contributions of all social groups. He also remarked the importance of effective inclusive participation as the key factor for a successful convening of the Constitutional Conference tasked to draft the Constitutional Document of the new democratic Sudan, centred on the three main pillars of “Peace, Freedom and Justice”.

Sudan currently faces enormous challenges that risk hindering the economic reforms and might further compromise the social structure. However, the large participation and several contributions made by the civil society in this meeting demonstrated a great interest in democratic participation in the country, whose institutions and society committed themselves once again to leave no one behind. Supporting said process is a moral compass for whomever such as BtG cares about ensuring a democratic, inclusive and open future for Sudan.