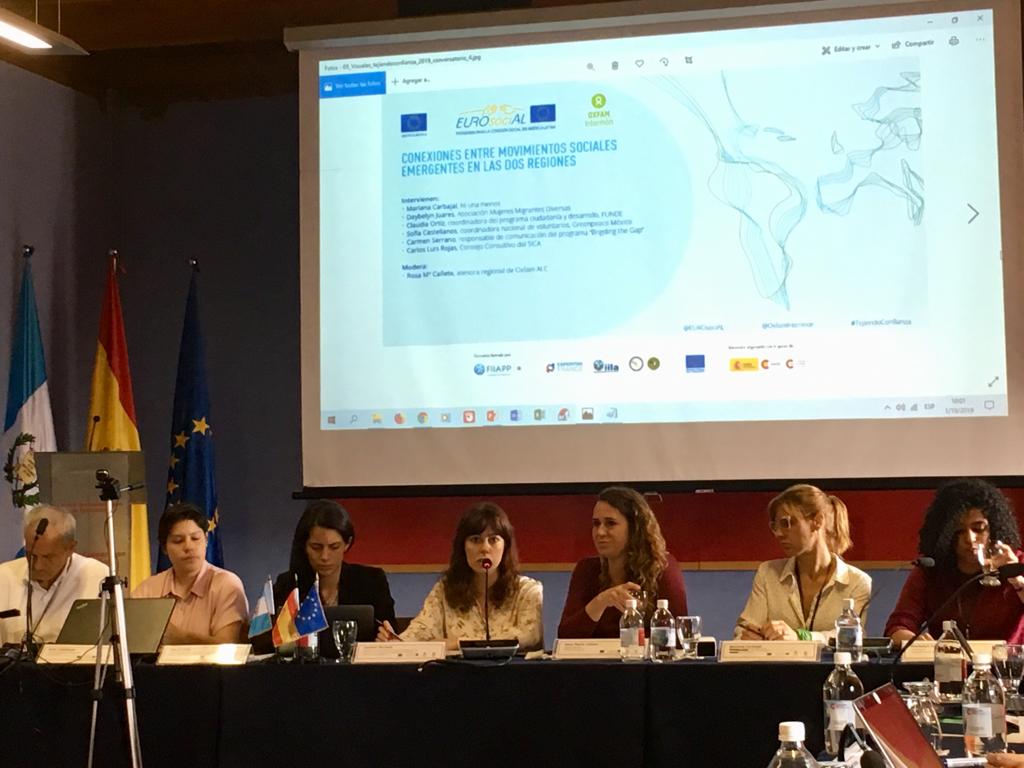 Who are the vectors of social cohesion? How can we build bridges with institutions to elaborate inclusive policies capable of closing the gaps of development in transition? These were the two pivotal questions of the workshop ‘Tejiendo confianza’, organised by the European programme EUROsociAL in collaboration with Oxfam Intermón on 30 September and 1 October in La Antigua Guatemala.

This activity, in line with target 17.17 of the Sustainable Development Goals about encouraging and promoting effective public, public-private, and civil society partnerships, was a very enriching space in which around 50 participants from Latin America and Europe presented the work carried out by their organisations and shared ideas on the role of civil society as a key actor for social cohesion, throughout the five roundtables among which the debates were divided.

I have had the pleasure to participate in the roundtable exploring the links between emerging social movements in Latin America and Europe, along with the journalist Mariana Carbajal on behalf of ‘Ni una menos’ feminist movement; Daybelyn Juares, from Asociación Mujeres Migrantes Diversas (Diverse Migrant Women’s Association); Claudia Ortiz, Coordinator of the Citizenship and Development Program of FUNDE, the branch of Transparency International in El Salvador; Sofía Castellanos, National Coordinator of Volunteers at Greenpeace Mexico; and Carlos Luis Rojas, from the Central American Integration System (SICA) Advisory Board.

It was very interesting to know first-hand the origin and current situation of different social movements and introduce the role of the organisations of persons with disabilities as key actor in Bridging the Gap: “Nothing about us without us” is the disability rights movement’s motto, as according to the United Nations Convention on the Right of Persons with Disabilities (CRPD), any decision that influences persons with disabilities should be made with their participation and that is how we work in Bridging the Gap project.

The European Disability Forum and the International Disability and Development Consortium are members of the project consortium and they guide our work with the implementing development agencies in the beneficiary countries. Likewise, we work closely with the organisations of persons with disabilities in our partners’ countries at every stage of the project: formulation, implementation and monitoring. This may make the implementation process a little more challenging, but this is the only way to build legitimate, effective and sustainable inclusive public policies.

In this sense, disability movement is an example of civil society participation, but it should be empowered to become a stronger movement. Additionally, governments should take specific steps to achieve full social participation, strengthening participation and funding mechanisms for organisations of persons with disabilities, being more transparent and improving the coordination with civil society. Both parts should clearly focus on the human rights-based model of disability and leave aside the medical model so that society can change its view towards disability. It is not about charity, it is a matter of human rights.

We must continue working hard to put the rights of persons with disabilities at the center of the global political agenda. We should look at ourselves in the mirror of feminism and environmentalism, the two strongest social movements today. Both movements have managed to take their issues to the highest forums of political decision, a big media impact and, most importantly, have great social support. They have become cross-cutting issues at global level and disability inclusion movement should follow their path.

We must communicate with each other and build bridges, because people with disabilities often face other discriminations based on gender, ethnic group, sexual identity, etc. We are vectors of social cohesion and together we are stronger. Let’s join forces to leave no one behind!